In the architectural decoration inside many churches, in Florence and elsewhere, we can often see stone which features shading and concretions of several colours, to the extent that it can be taken for particular types of marble.

In fact this is not marble, and this particular stone is generically defined as alabaster.

However, it should be pointed out that this term is used indiscriminately for two types of rock, one chalky (gypsum) and the other calcareous (limestone), both of sedimentary origin, but formed in different ways; they share certain morphological characteristics such as translucence, concentric patterning and stripes of alternating colours. 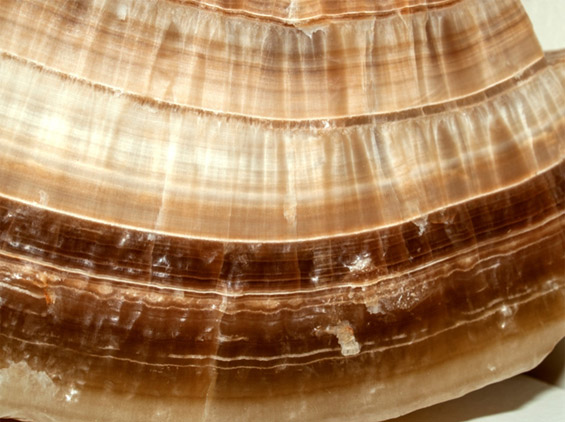 The first type, the chalky variety, is usually defined “Volterra Alabaster”, since the Volterra area is the exclusive production zone, while the second type, the calcareous stone, is defined as “Oriental Alabaster” or “Alabaster-Onyx”, which was the name given to the first alabasters brought by the Romans from Egypt, in other words, the Orient.

Another fairly common name for these two terms is “Alabastrine”, and Montaione Onyx belongs to this second category. The blocks extracted from the quarries, depending on the cutting method, show striking shapes and patterns. The colouration of the various layers, besides showing the time interval between one calcium carbonate precipitation and the next, also indicate the type of soil or the oxides transported by the circulation of water.

Generally speaking, the colours are due to the presence of organic substances such as humic or fulvic acid, metal ions and pigmenting substances. The hardness of this type of crystalline limestone is around 3 on the Mohs scale, in line with its composition, which is almost wholly calcium carbonate (sometimes more than 99%), and this makes the stone easy to work and perfect for polishing.

The blocks generally come in modest sizes, so they do not always suffice for larger-scale works, and it is therefore sometimes possible to see, alongside the alabaster-onyx – the main constituent – travertine or compact limestone (this is common in moderate-sized pieces such as sarcophagi or columns).