Limestone Alabaster-Onyx was the Egyptian stone used by the ancient dynasties of pharaohs (for example the statue of the Pharaoh Menakure, from the middle of the 3rd millennium BC), and it was widely used by the Greeks and the Romans as well as the Egyptians.

The art of stone

Pliny tells us of the stone’s first introduction in Rome. The Romans obtained their supplies of alabaster onyx from Thebes in Egypt, Damascus in Syria and also in Arabia and Algeria.

The stone’s relative ease of working, its perfect shine and harmonious colours, meant that is was used for statues, architectural ornamentation, religious items, cladding for walls and paving for floors. Experts in ancient marbles like Faustino Corsi, in Delle Pietre Antiche, and Raniero Gnoli in Marmora Romana, describe the “Alabasters or Onyxes” employed in ancient Rome, citing reliable sources regarding their provenance. 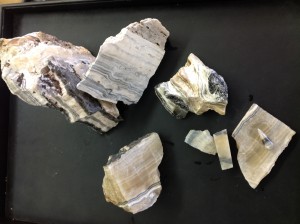 In his Istoria delle pietre (1597), Dominican priest Agostino del Riccio discusses several types of Alabaster Onyx present in Florence’s churches, classifying them as Transparent, Oriental, Cotognino, Diacciato, Occhiato or Dark, and considering them generically as “oriental”. As for the names of the stone types present in Rome, he writes “if I were to list the types of alabasters found in the city of Rome, I would need almost a whole book to describe them”.

The use of “Oriental Alabasters” was widespread in Rome during the Republican period, particularly in Opus sectile pavement and in the Incrustaziones, or column decorations, while from the 2nd century onwards it was also used in statuary. During the Renaissance, ancient marble, including limestone alabaster, was re-used to embellish Christian churches.

Small amounts of this alabaster even reached Florence, to be used partly in the polychrome marble inlay in Gaddi’s chapels (1576-78), in Santa Maria Novella and the Niccolini palace (1585-89) and in Santa Croce (A. del Riccio), and is also visible in the columns of a tabernacle in the Certosa.

Alabaster was also used in Florentine commesso or mosaic work (Opus sectile), a technique in vogue in Rome since the early days of the empire, but which reached its peak in Florence under Ferdinand I de’Medici, who established the Manifattura delle Pietre Dure (workshop of semi-precious stones) in 1588.

Examples of alabaster used in mosaic work can be found in Florence, in the surfaces of tables in the Uffizi, the Pitti Palace, the Medici Treasury and the Villa del Poggio Imperiale. It is impossible to verify the exact provenance of the alabasters and onyxes used in Florence, even using modern petrographic and geochemical analysis; so for those used in the chapels mentioned here, we must trust A. del Riccio, who saw them put in place a few years before his book was written.

Alabaster Onyx is also used in many other Florentine churches: noteworthy are the splendid panels in some of the chapels of the church of Santi Michele e Gaetano, and the pair of altar columns and the cornice above the altar in the chapel of S. Filippo Benizzi in the church of the Santissima Annunziata.

In the church of the Holy Trinity there are six onyx candelabras, as well as the altar and three insets in the walls of the chapel, including the one containing the Crucifix of Palma on a background of Portoro marble, and lastly the many panels on the four pillars of the baldachin by Giovanni Battista Caccini in the church of Santo Spirito; a remarkably interesting collection.