Research into the material

In the latter half of the last century, even well-known scholars took an interest in Montaione travertine and onyx.

For each of these types he identified the distinguishing features and principal colouring agent, usually compounds of manganese such as pyrolusite, pollinate and psilomelane, the last two of these in much lower concentration than the first.

Iron compounds too, such as limonite and ochre, come into play, either alone or combined with manganese in a phantasmagoria of colours and shades which is difficult to describe, but gives an amazing effect of alternating hues. Black onyx in particular was considered to be unique and highly desirable. 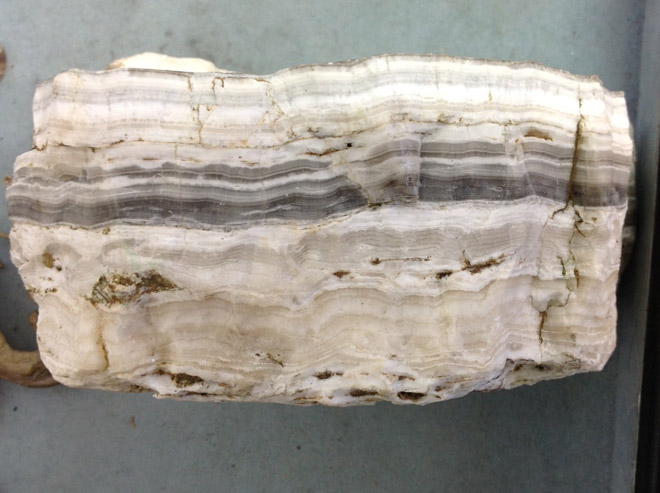 It was made into extremely thin sheets, which were suitable for cladding bases and pedestals made of other types of travertine. It was also noted that other black onyxes from different sources were black because they contained carbon or other substances, and in terms of shine, effect and durability they paled in comparison to the Montaione variety.

Another foreign scholar, French civil engineer and geologist Paul Dumon, wrote that in this area “there exists a quarry for marble known as Montaione onyx, in black, yellow and brown varieties.

It is a material which polishes well, is much sought-after and convenient for luxurious decorations, tables etc, thanks to its extremely variegated background with undulating onyx bands, which range from ivory white to amber yellow and black.

This onyx has been analysed by Pieri, who observes that this stone appears to be the only type in the world to present a black pigmentation. In the same area, a quarry is being explored for yellow travertine with an arabesque pattern, more or less clear and silver in colour, with certain parts displaying a very pale chestnut-grey background with markings in various colours and ash-white.

The price of this travertine would be fairly high, given its special characteristics. A single company is listed for quarrying, cutting and finishing. Another company is exploring marble in Montaione.”

In 1977 Nicola Cipriani and other scholars from the University of Florence, as part of a general survey of travertine in central Italy, took samples from an active quarry to the south of the town, deemed important for the high content and attractiveness of the onyx extracted there.

This material was extremely varied in appearance, structure and colour, and unique types were a fine-grained black onyx and another formed of long hazel-coloured fibres with a silky sheen.